Registering to vote: (It’s a closed primary, for instance, in order to vote for Jared, you would need to register as a Republican.)

Early voting for the Primary Election is May 26th – June 8th.

More details and information can be found below or on the Secretary of State’s Website.

We may be only a few months into the new election year, but according to Politico, the 2018 Nevada governor race has already been slated as one of the country’s “top governor’s races.” State law prohibits the current governor from running again, which means that the position is now up for grabs. As of January 2018, the election is reported to be a “toss up,” placing the Silver State under the political spotlight as the nation watches to see who Nevadans will select as their next leader.

To help educate Nevada residents on the election process and to provide key details on when and where to vote, we’ve provided a detailed gubernatorial election guide, which we will be updating on a regular basis in the months leading up to what is looking to be an historical election.

The Nevada Gubernatorial Election: An Overview

In 2018, Nevada residents will elect a new governor of Nevada. The current governor, Republican Brian Sandoval, is term-limited, which means that he is not eligible to run for re-election. Nevada is one of eight states that places a two-term limit on its governors. Therefore, Nevada will need to elect a new man or woman for the position.

The last step in the election process is the general election, which is scheduled for November 6, 2018. This is when registered voters in Nevada from any party affiliation (Republican, Democrat, Independent, Libertarian, etc.) may vote for the candidate of their choosing. Whoever receives the majority of votes in the general election will be declared the winner and will be sworn in as the next governor of Nevada.

Only 37% percent of Nevadans vote in the primaries. When only a select number of people vote in the primaries, favoritism is given to “establishment candidates” who are well-known among the small political circle of active voters. This makes it particularly challenging for outsider candidates to have their candidacy considered.

This has lead to some, such as Doug Goodman from Nevada Election Reform, to propose creating an open primary. 27 percent of Nevada voters are not registered as Democrats or Republicans, which makes them ineligible to vote in either party’s primary. This number, claims Goodman in an op-ed to The Nevada Independent, is on the rise due to the increase in partisan politics. Creating an open primary, he reasons, would encourage a fairer election system because it would allow more eligible voters to participate earlier on in the election process.

Until reforms are made, however, representatives from both parties continue to work hard to register Nevadans to vote and to encourage them to vote not only in the general election, but in the primary as well. Currently, only approximately 41 percent of Nevadans who are eligible to vote are registered, which suggests much more work is left to be done.

The Role of Governor: 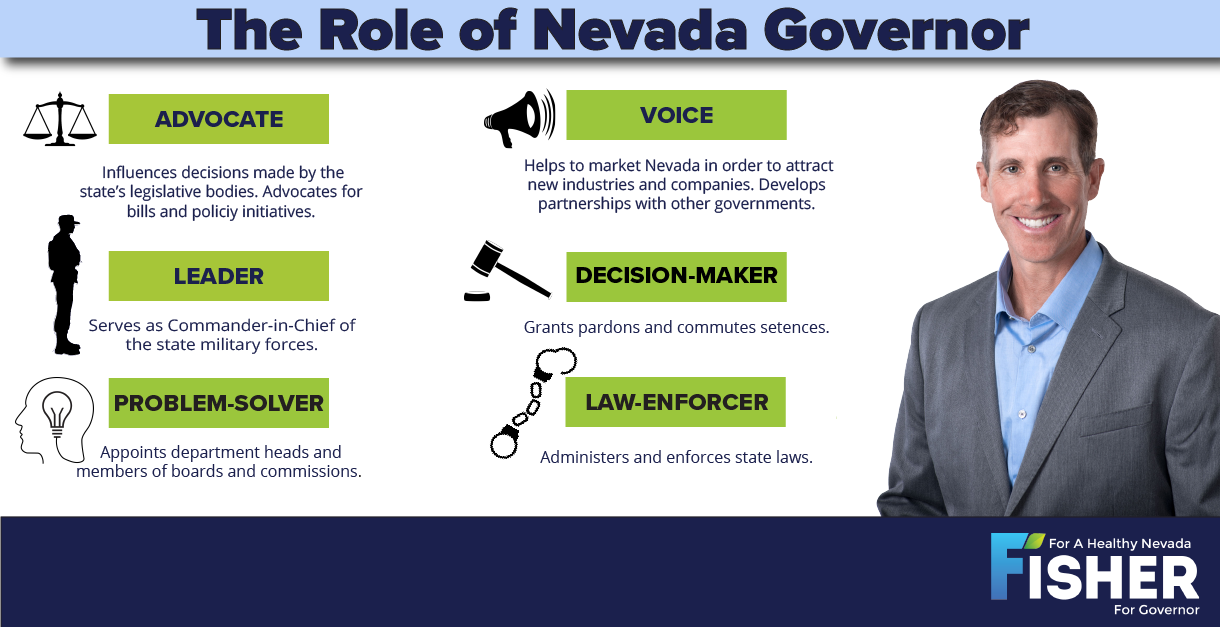 The Governor is the highest office position in the state. Whoever is elected to the position assumes the role of the head of the executive branch and is commander-in-chief of the state’s military. You can think of the governor as like a CEO, only instead of overseeing a corporation, he or she is overseeing the operation of the state government. The following are several of the governor’s chief duties.

The governor of Nevada is responsible for:

Who is Running? The 2018 Gubernatorial Candidates:

The Nevada Governor Election: The Details

In order to encourage more people to become registered voters, the Nevada government offers several options for those looking to register.

Nevadans can register at the following locations:

Nevada has taken several steps to make the voting process as convenient as possible.

Where to Vote on Election Day:

Your polling place is determined by the voting district where you reside. Visit your local county website in or order to locate the nearest in-person polling station or click on the links below:

Early voting and voting by mail is also available in the event that you will not be able to vote in person on election day.

Who can vote in the primaries?

We encourage anyone registered as an independent to change their record so that they can vote in the primaries and have their voice heard.

Who can vote in the Nevada Federal and State General Election?

In order to be eligible to vote in the Nevada General Election, you must:

Because it can be tough keeping track of when and where to vote, we recommend signing up for an email reminder with the Fisher for Nevada campaign. The following are several key dates to note:

Registering to vote is easy. You can register online at the Secretary of State’s website. It only takes a few minutes.

About Fisher for Nevada: Fisher for Nevada is the official campaign website of Jared Fisher, a Republican candidate in the 2018 gubernatorial election. Jared Fisher is a Southern Nevada resident and Las Vegas business owner who is campaigning on a platform that emphasizes the 3 E’s: Education, the Economy and clean Energy.